Ok, that isn't matter what and from where.
Originally I am from Russia, from the north city Arkhangelsk. That gingerbread cookies are called "kozuli" here and are traditional north russian cookies for X-mas. Mostly we do not make houses, just figures.
Anyway, every year I try to do some of my own and as usual half is burnt, or badly painted. So, have a look on my horrible 2007 ginger breads....
I tried the green colour..... All of them painted with the help of my husband...

My two sisters and I made gingerbread houses last week, they were pre-made and pretty cheap considering how quickly they collapsed.

Here are two shots of mine:

And finally my other sister's, whose turned out the best, before the roof broke in two anyways:

Well, at least they were fun to make.

I've made gingerbread houses for a few years, but I only have pictures of a couple of them.  Since I just found this group, I decided to post them:

I wish I had pictures of my first gingerbread, which was a 3-storey Victorian with blue icing from an old Better Homes And Gardens Contest Winner recipe.  If I could at least find that old article, I'd post the magazine picture, but I can't even find that.  More pictures and the How To at http://www.theinnbetween.net/gingerbread.html
Hiyas. Newbie here! I love seeing your work. I was going to try to make a gingerbread house this year but figured I better start off with just cookies as I've never done this sort of thing before.

This is my very first gingerbread house. I baked it and built it myself last year. I haven't had time yet this season to make one, but have enjoyed looking at everyone's pictures. :0)

A few pix from this year and last...

GingerBread Lane 2007-2008. What can I say but wow, where did it go. As I sit here at my in laws home in Pennsylvania on Christmas Eve, all I can think to myself is where did the season go already. In 7 days it will be time to again say goodbye, and that is something I am never ready to do. But, these next 12 days will be hectic as all get out. After a nice restful and relaxing day tomorrow, it is full speed ahead planning for the 2008-2009 season. First, the day after Christmas I get up early early early and head out to hit the sales. That usually lasts 3 or 4 days, with some spillage into early January. On January 1st, I will show up at the mall, sad, and get ready to facilitate the give away. A few hours later, it will all be broken down and cleaned up. Then a few days of putting stuff away at home, then a meeting to wrap it up with mall management, then onto planning for 2008. If you do not start planning right away for the next year, there is no way for the next year to happen. It really is a year round effort.

Back to this year. The mall offered me a chance at the end of last season to go with an opening day that coincided with the arrival of my good friend Santa Claus. I was conflicted at first, because the day after Thanksgiving had become a tradition for me. And a good one, because, no host site is ever open on Thanksgiving, so it always gives me 36 or so hours of uninterupted time with no one in sight to work on it. This would shorten that window to 12 hours. But after considering, I decided the obvious choice was to say yes, as not only would it give me a chance to finally have a normal Thanksgiving with family, but a normal Holiday season with my wife. And to boot, the normal GingerBread Lane season is 25-40 days. This actually lengthened it all the way to a 54 day run, which, I loved.

Good season, I can honestly say this is the 2nd best I have ever done. Second straight year I have said that. I felt at times it would be my best, but in the end, I am going to stick with 2nd best to the 2003 village. But, with what I am now finally getting good at ( interiors of houses, brick work, signage, 2nd and 3rd floor windows ) I feel I have the tools to make 2008 THE BEST EVER. Simple changes too, brick sidewalks throughout The Lane, railroad tracks with gravel throughout The Lane, doubling all the trees in size, and filling in the last major hole in the layout to use as a .................get ready.......Christmas tree lot, it will be my best ever.

Check on my webpage, www.gingerbread-lane.org, for all of the details.

And since I do not believe in doing pictures behind a cut, this will take up a lot of space on your screens. Sorry, I post 3-5 times a year, so this is just how I roll.

The crowd awaiting the unveiling

Right after the curtains came down, over 23 of my coworkers and comanagers showed up.

An arial of the village 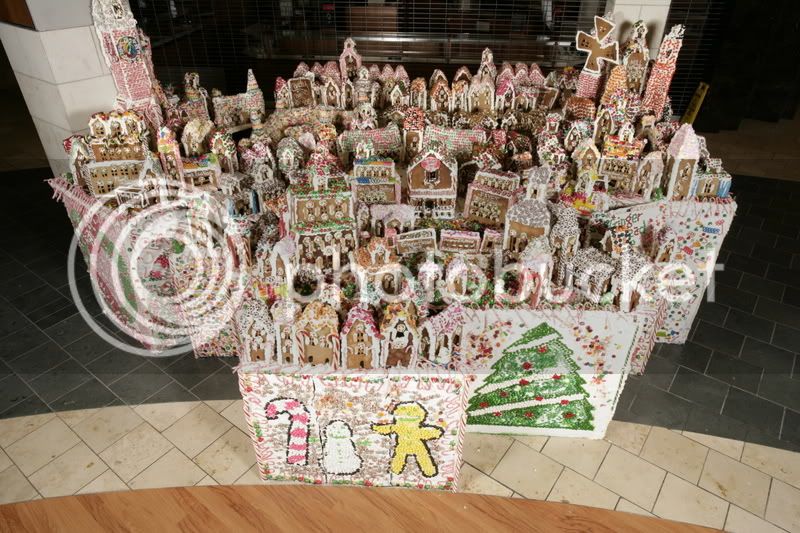 The marquis welcoming everyone to The Lane

The world famous Plum Pudding Hotel. My best ever. 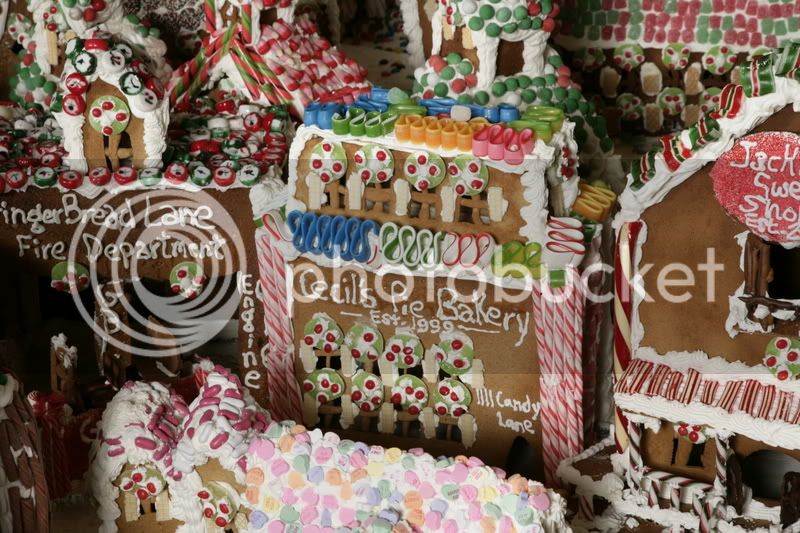 Faye's Famous Pierogies, for my mother in law.

And for me, Jon's EggNog Distillery.

Last week I set out to make gingerbread men and a house with my best friends son and my niece...

Hi guys, just thought I'd put in my two cents... I didn't make a gingerbread house this year, as I was still recovering from the one I made last year, which I thought you might enjoy:

Unfortunately, half-way through making the egg white snow, I ran out of icing sugar, and had to use normal sugar, hence why one side of the roof is all shiny, compared to the more matt rest of the "snow". The snowman is made of slightly trimmed marshmallows, and his top hat, eyes, mouth, and nose are all assembled from pieces of licorice allsorts that I have mangled. The fence is made of chocolate licorice bullets, and the wonky trees are pointy-top lollypops, with two marshmallows impaled on the stick, and then covered in "snow".

I guess I'll make one again next year... I can't bring myself to make those damn things more than once every two years, as it takes bloody three days, and I'm not always feeling that productive.

okay, you guys, so I know it's nothing to write home about, especially comparing to some really awesome creations which can be seen here... but this is my very first gingerbread house, and I'm proud of it! I also had lots of fun making it.
Merry Christmas, everybody! Care!